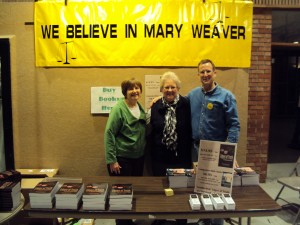 Nearly 3 years ago God gave us a wonderful gift. My book, “Edges of Truth: The Mary Weaver Story,” was done and ready to be launched. We scheduled our launch in a beautiful building in Marshalltown, Iowa which was available at a very reasonable rate. God gave us free publicity on the radio. Before the doors were open a long line of people waited to get in. People crowded into the room and bought books, visited with others and relived memories. Mary, Steve (my co-author and Mary’s lawyer) and I were able to share all the wonderful ways in which God worked in Mary’s case.

More than 20 years earlier Mary had provided childcare to a baby who quit breathing. Mary did CPR and called 911, but within a day the baby died. So much of the evidence pointed away from Mary but some (not all) of the medical experts believed Mary inflicted the fatal blows on the baby. Mary was eventually convicted of first degree murder and began a life sentence in prison. But God was not done working.

As we met to launch our book twenty years later, the interest in Mary’s story had not died. The reporter who championed her case was there along with her appeal lawyer. Some were there from her support group and some drove hours to attend the launch. God answered prayers in so many ways that weekend.

The launch seems like it happened so long ago, but Mary’s testimony lives on. Writing Mary’s story challenged me as I wrote of an ordinary Christian woman who kept a thankful heart even when separated from her family in prison. An excerpt from the book has just come out on a Thanksgiving blog. You can read it here. I hope her story will inspire thankfulness in you like it did in me.