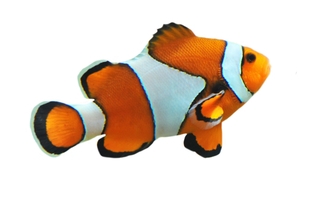 Recently we celebrated our fortieth anniversary early by snorkeling on the Great Barrier Reef. We saw sea turtles, small sharks, dozens of kinds of tropical fish, and a fresh glimpse of God.

I’m not talking about visions or new revelations, but you know what happens. You’ve been saved for more than 50 years, you’ve read your Bible all your life, and all the superlatives about God become watered-down. You know that God is all-powerful, all-knowing, everywhere present, but you can’t top that, so God’s unique attributes becomes common place.

Ever feel like that? I admit I do sometimes, but this trip to Northern Australia gave me a fresh perspective on the inadequate adjectives and nouns and verbs which can apply to none other than God.

On the reef we reveled at the tiny clown fish that darted in and out of the anemones, becoming invisible in seconds. Many of the dozens of varieties of butterfly fish alive today swam within an arm’s length of us. Some were as small as a coin; some as big as a dinner plate. I stared at one bi-color parrot fish after another, wondering at the different patterns in some of my favorite iridescent shades of blue and coral. Moorish idols, humuhumunukunukuapua’a, trumpet fish, and regal angelfish swam around the rainbow of coral, creating scenes fit for jigsaw puzzles. But how does God fit into this picture?

Wow! God is so far above and beyond, before and after, source and sustainer of everything we saw! 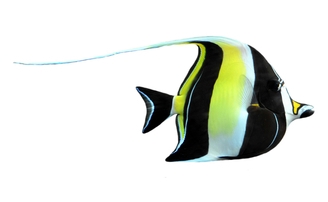 I thought of it like this. A few years ago I painted a picture of an imperial angelfish. Studying a picture of a real one, I sketched a fish with a pencil. Then I found paints in the right colors, and in a couple of hours, produced a pretty fair, flat picture of one fish.

One day about six thousand years ago God said, “Let the waters abound with an abundance of living creatures,” and the seas moved with fish and sea creatures. In an instant those first fish appeared, began swimming and eating and breathing. Soon they began to reproduce. We don’t know how many varieties God made on that first day, but those first fish contained all the genetic material in them that would become the amazing varieties of fish we see today. God not only created them, but he feeds them and sustains them every day of their lives.

Remember my fish picture? I looked at the picture of a fish, and copied the outside, flat appearance using paper, pencil, and paint.

God created his fish from nothing. No matter or material; we know that. But he also had no pre-existing fish to look at when he created the first fish. All of our ideas spring from combinations of other ideas or experiences. But God started with no ideas outside himself, no colors, no dimensions, no models, no molecular structures. And he created living, breathing, reproducing, fish who are the parents of all fish today.

I can look at nature and fashion imaginary creatures that have similar qualities to real creatures. But what could I make or even imagine without prior experience with matter, color, dimensions, or life?

This made me wonder at God’s creative process. Did he take time, before the beginning of our time, to figure out and plan the universe, or did he always know exactly what he would do? Did he use a thought process to go from not knowing what he would do to planning the universe?

If I could create all the tropical fish in the sea, I’d want to linger over each one and plan out the colors, patterns, and traits of each one, but God’s thought process is probably far different to mine. I can’t imagine God discarding one idea for a better one when he always knows what is best. Some part of how we think comes from how God thinks, but we can’t even imagine how much greater his thoughts are than ours. 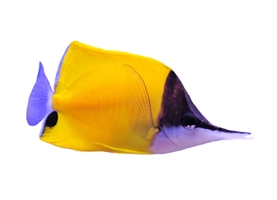 In a moment of time, God created, not just one fish, but the parents of all the fish we see today. In a few moments of time, distributed throughout six days, he created everything in the universe.

Imagine what it means to be the source of all things. God not only created all things, he planned all the ideas for all matter, all living creatures, all language, all thoughts and emotions of animals and man. He inserted genetic material into living creatures that men could only begin to understand after thousands of years of study. He put into play all the forces of nature and mathematical concepts that people would use, thousands of years later, to invent and use the internet and smart phones. Before creation he knew all the scenarios of what could and would happen on earth. He had nothing to work with except himself. He planned free will, knowing the cost, along with redemption to heal consequences of man exercising his will against God. When he said, “Let there be …” nature began and responded in instant obedience.

God is the source of all things and he continues to reproduce his original design though a reproduction system that allows for huge variety within kinds, but also places boundaries beyond which no human can pass. He knows every living creature perfectly and every day he provides every requirement for life for every one of them. Though the fall of nature brought death and suffering, our world is still intricate beyond all understanding.

So when I remember a papa, mama, and baby clown fish darting into a tiny patch of fine green anemone, like living jewels on a velvet cloth, I remember this is a glimpse of God’s creation. The tiniest spot of creation helps me sense a small degree of God’s infinite wisdom, power, generosity, love, and joy. 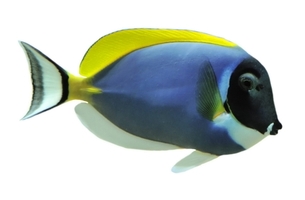