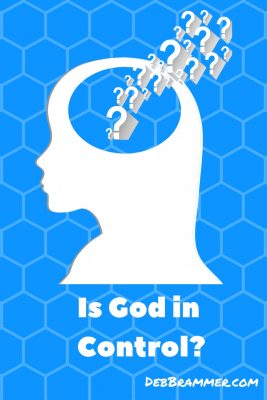 Every day we scroll through Facebook and other social media to find out what’s happening. And what reward do we receive for our faithful commitment to the news? Full term abortions, gross immorality, violence, corruption, rape, hatred—news so bad that we have to screen it when children are in the room.

That kind of news makes us wonder: Where is God in all of this mess? Is He still in control? Why does He allow such evil? If He can stop it, why doesn’t He? Questions such as these can turn unbelievers away from God and can shake the faith of Christians. However, we don’t have to fear the answers. We just have to make sure we look to God for the answers.

Nevertheless, God doesn’t explain the reasons behind all of His actions. After all, He is not accountable to us. He does, however, explain enough of His logic so we know that we can trust Him. His explanations give us some facts to anchor our faith upon.

What does God’s control mean?

Is God in control? Yes. But God is like a teacher watching her students on the playground. The teacher watches while one student uses another’s truck without asking. She sees a big girl crowd in front of a smaller one in line for the slide. She hears a boy call a girl “stupid.” She does not police every action. She doesn’t force each child to correct each misbehavior, though she often disapproves. She knows that children must learn to give and take and cope in an imperfect world. But the teacher watches carefully to ensure that actions do not escalate out of control and that someone does not get seriously hurt.

The teacher controls the situation without controlling the students’ every move. In the same way, God controls everything all the time. Furthermore, He keeps perfect records for coming judgment.

Is the world today more evil than ever before?

But how can we conclude that God is in control when the world around us lists in a sea of chaos? This stormy world gets more evil every year. Have circumstances ever been as bad as circumstances today? History teaches us that our world’s immorality, greed, cruelty and indifference to God are not unusual. In fact, many periods of history were just as bad or even worse!

The Minor Prophets lived during one of those dark periods of history.

Zechariah and Haggai worked to rebuild the temple in a time when Jerusalem looked like a Midwest town after a tornado. The people in Zechariah’s and Haggai’s day laid the foundation of the temple. Then jealousy, disillusionment, poverty and selfishness stopped the project for 16 years.

In Hosea’s day even the priests turned to drunkenness, prostitution and murder.

Micah lived while government leaders were corrupt. But, then, everyone else was equally corrupt. Micah couldn’t trust anyone—not even his friends, his relatives or his wife. He claimed that not one honest man remained in all of Israel.

Those prophets questioned God. “Why?” they asked, just as we do today. God did not try to hide from us the doubts and despair those men felt. In His Word, He gives us a clear record of their feelings. He reveals to us all of Israel’s chaos and hopelessness. But during the nation’s darkest hour, God was in control.

In spite of the fact that God has complete control of everything at all times, He doesn’t cause our greatest problems; He allows them. Sometimes we think that allowing them and causing them are the same. We think that if God doesn’t stop life’s tragedies, He is partly to blame for them.

Who, then, is to blame for the chaos in the world? Not God. He created a beautiful world and put in it people to whom He gave volition, or free will. He made them free to love and serve Him—or to disobey Him. Adam and Eve chose to disobey God, and all of us have followed in their footsteps. Sin entered the world and brought with it death, disease, hatred, greed and every other kind of evil. Our world is cursed by sin, not by God.

Satan wants us on his side. And he has a lot of help: society taunts us to do what feels good, and an urge inside us makes wrong seem quite right. In spite of this world full of people trying to please Satan, society and self, many still blame God (not people, not sin) for the world’s problems. They’ve forgotten who their enemies are.

In spite of sin’s influence, in spite of man’s blame-shifting, God is in control. He has, however, determined to work for a while in this sin-crushed world. Sin causes many problems. Sometimes those problems come as punishment for a specific sin committed, but often they come simply as the natural result of living in a sin-cursed world. At other times we get hurt because of someone else’s sin. It isn’t fair, but sin never promises to play fair.

Crimes of abuse, murder, theft, rape or drunk driving claim innocent victims. Sin by its nature hurts others. When a teenager rebels, parents suffer. When Christians neglect witnessing, prayer and giving, unbelievers don’t hear of the One Who can change their destiny.

Are we doing our part?

When Christians get too busy meeting their own needs to help others, the needs of other believers go unmet. Naturally our sin and neglect hurt others. Today God uses people to do much of His work. When we fail to do our assignment, or our part, we hurt others.

Instead of blaming God for the world’s problems, we need to ask ourselves, “What problems am I causing? If I’m not part of the problem, can I be part of the solution?”

We can offer tremendous help to the others in our own little corners of the world. But so much of the world lies beyond our reach. Even if we all do our share where we are, the world will remain in terrible shape.

God will fix it.

“Why doesn’t God fix things?” we might ask. Wouldn’t it be great if God would get rid of sin and make life perfect?

He will. In Heaven. But we aren’t in Heaven yet. Earth’s flaws and hardships will make Heaven all the sweeter by contrast. They set us longing for Heaven, and that longing is only right.

Well, then, why couldn’t God just fix up the earth, make everything fair and just, and make people do what’s right?

He’ll do that too—for a thousand years when Jesus reigns on the earth. However, even then, many people won’t love Him.

Right now we’re locked into time. The great here and now seems so important that it’s hard to peek past the now into eternity, when Jesus Christ will make everything right. Though God cares very much about every detail of our lives, He never loses His perspective. All of our tragedies and cares put together form only a speck of eternity. Many of the problems that we regard as crucial now will one day seem trivial. If we would see time as God sees it, we would face life with confidence.

In the meantime we can use that speck of time to live out our lives in a way that will affect all eternity. As small as “now” is, it is all we’ve got to work with.

How can we cope with the world’s chaos and come out on top? Believers still need this old prayer: “God, give me the serenity to accept what I can’t change, to change what I can’t accept, and the wisdom to know the difference.” Sounds great—until we come across something we can neither accept nor change. What do we do then?

Accept it anyway—with joy. It’s easy to let the world’s chaos and life’s trials rob us of our joy. We need to guard the joy in our hearts.

Paul’s entire letter to the Philippians explains how to remain joyful in chaos. It is in this context that Paul instructed us to fill our minds with things that are true, honest, just, pure, lovely, of good report, virtuous and praiseworthy. This verse is more than a how-to for keeping a pure thought life. It provides a how-to for guarding our joy.

We sing “Count Your Blessings,” but we more often count our trials—the appliances that have quit working this month, the number of times the kids have been sick, the people who cut in front of us in line.

While living on one foreign mission field I could easily count trials and problems: the traffic violations I had seen at a given intersection, the trash dumps on a certain road, the missionaries I’d heard about that got cheated or the weird diagnoses of doctors.

Bad things happen. Denying reality won’t make it go away. However, after we’ve dealt with our problems, it’s time to push them out of our minds and replace them with blessings. After we’ve faced the tragedies of the world and can do no more to help, we need to dwell on God’s benefits. When our conversations center around negative issues for which we have no answer, we can introduce some positive issues to balance them.

Sin cursed the world, but it did not completely destroy God’s creation. In spite of the violence, hatred and ugliness brought into the world by sin, much of the gentleness, love and beauty created by God still remains.

Searching for it will bring the joy back into our lives.

God is in control of the world today. And though we are forced to live in a sin-cursed world for a time, we can make that world a better place for others if we let God control us. We can refuse to let sin’s misery blind us to God’s blessings.

Every day gives us another opportunity to build our faith in God. We need that faith to face the world’s toughest problems.