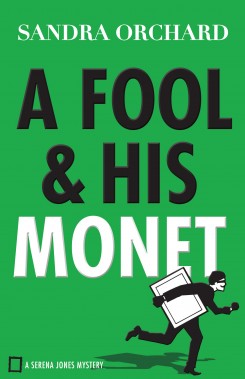 My March giveaway features another art mystery by another Christian author. I’ll announce the winner who will receive A Fool and His Monet by Sandra Orchard at the end of this Book Blast. If you don’t win this time, you have three more opportunities to win other Christian ebooks during 2018.

In this Book Blast I’m going to use the books in my Art Spotlight Mysteries to take you into my writer’s world and show you an example of how authors live their fiction before they write it.

Early in the plotting process for this first book I chose graffiti as the predominant art form. I figured graffiti would be the ultimate insult to any serious artist. For inspiration I studied the work of Banksy, the foremost graffiti artist on the planet. Then I designed a character, Zaxx, a Banksy copycat, to make Jordan’s life miserable.

Now, even though I gravitate easily to crafts, I’m definitely not an artist. Still, I needed to come up with fictional art to go with my fictional character. I needed very specific graffiti to fit my plot. I didn’t just want to describe the images, I wanted to include real images in my book for the reader to see. Starting with silhouettes I downloaded from the internet, I doctored some images and crafted others, cutting them out of red and black paper. The result was six graffiti images which you can view in the book or on my Pinterest board. My efforts turned me into a copycat artist telling the story of a fictional copycat.

As I sat at my desk in New Zealand, I took a desk chair journey to Boise, Idaho to search for art Jordan would love. It didn’t take me long to find gorgeous sculptures of children by Ann LaRose. I contacted the artist and received her permission to include her pictures of them in my book. After the book was complete (but before an extensive revision), I returned to the States and, in 2011, I actually saw the real statue with my own eyes. I borrowed a broom from a nearby Subway, brushed the leaves from “Keepsies,” and snapped photo after photo of it. 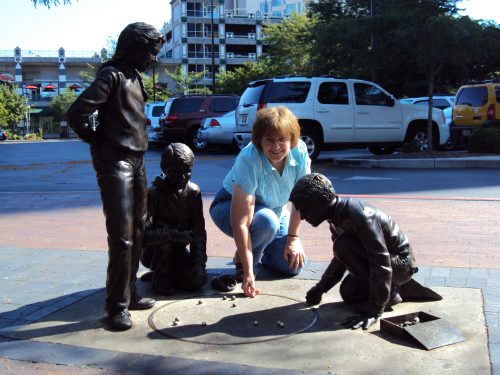 My research had turned into writing and, in the end, actual on-site experience. It’s sort of a backwards way to experience art, but it makes writing possible from a distant location. In 2018, I was back in the States again. I searched out an Ann LaRose statue in the public library in Loveland, Colorado. Here I am sitting beside “C is for Cat.” 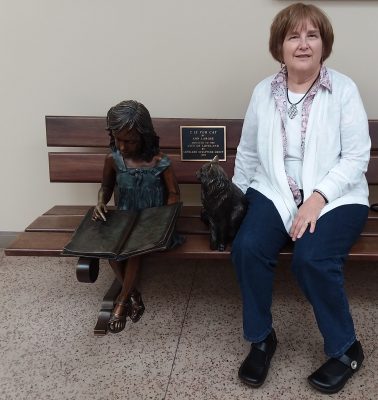 See the graffiti images and Ann LaRose’s statues on my Pinterest board.

Much of the art I describe in the book can be viewed online. My research showed me real Lego reproductions of M. C. Escher drawings which are illusions in themselves. (Like Escher, the Lego artist had to “cheat” a bit to make the image work.) Jordan and Felipe weren’t the only ones who loved these. This author was grinning as she wrote about them in this story.

I did, however, take another backward journey into experiencing the art of Déjà Who? The book would be incomplete without a mention of Minneapolis Institute of the Arts. Here Felipe fell in love with art. Andrew Wyeth’s “Bronco Buster” inspired him to become an artist. 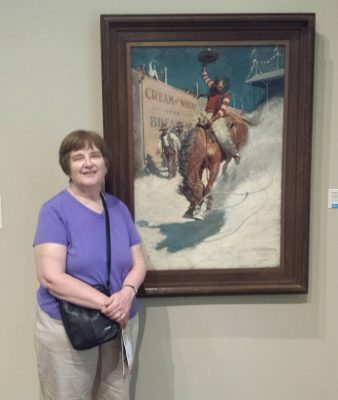 Among the illusions in MIA, Jordan found a peculiar exhibit, a historical office filled with real objects that told a fictional story. It was here he met the redheaded Rafael Romero, an FBI agent who himself “fooled the eye.” In 2018, after my book was complete, I saw the “real” painting and exhibit, as you can see from these two photos. 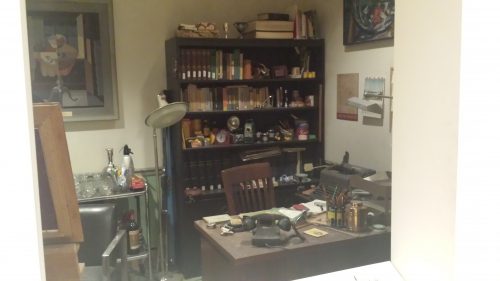 I find it a bit surreal to stand for the first time before a work of art about which I’ve already written, described, even pretended to be an expert on. It makes me wonder about the fine line between real, fake, and copied. Writing about it first and discovering it last seems wrong. And yet I praise God for the world that opens up to me now as I sit at my desk in Invercargill, New Zealand. (Invercargill is not quite the end of the world, but not far from it. It’s the southernmost English speaking country in the world and boasts the southernmost Starbucks.)

See amazing illusions from Déjà Who? on this Pinterest board.

As I came near to finishing this third book, I found I had made a near fatal error for my book. I was using the term “abstract art” for what was actually “contemporary art.” In art circles, abstract art is usually considered to be art that separates itself from how something really looks and originates from about 1860 to 1970. Contemporary art is not just current art, but especially applies to edgy art that challenges traditional boundaries and isn’t easy to define. I had written the entire book about abstract art when Destiny Champion’s work was actually contemporary.

Carrie Stuart Parks, forensic artist and award-winning author of the Gwen Marcey Series, helped me sort out the terms and fix the problems in my book. She and another author from ACFW (American Christian Fiction Writers) gave me valuable input. I am so thankful that the Lord helped me to find my mistake in time and sent art experts who were also writers to help me.

As I was nearly ready to launch I Scream I was sitting in prayer meeting in our sending church in Montana when three words popped in my head. I knew I had the perfect way to celebrate my book launch. Ice Cream Social. This would give local readers a way to taste a bit of writer’s logic. 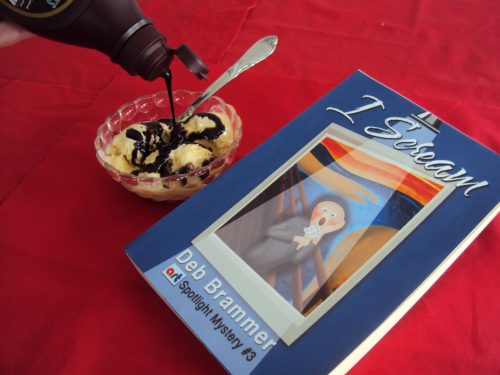 My foray into contemporary art showed me how classic abstract art influenced contemporary artists today. I gained new appreciation for “The Starry Night” by Vincent van Gogh and “The Scream” by Edvard Munch. I found some interesting Paul Klee’s, but I have to admit, I still don’t get anything out of Jackson Pollock’s drip paintings.

I couldn’t stop with merely knowing more about contemporary art, however. I had to produce Destiny’s fictional art. This time I felt only slightly intimidated creating art that was supposedly produced by a very skillful six-year-old.

The first painting by Destiny Champion was a stock photo. For the second I resorted to cutting out another silhouette and pasting it over a stock photo. For the third, however, I started with a blank canvas and a few tubes of acrylic paint. I spent hours ogling Edvard Munch’s “The Scream,” blending colors, and trying to figure out how much of what I was doing would be able to be produced by a six-year-old art student. Thankfully, this painting only made it onto the back cover of the book and my Pinterest page. The cover photo, a stock photo altered by a designer, was not intended to reproduce Destiny’s image.

Recently I’ve begun to think about how digital images blur the line between fact and fiction. Today art can be created and displayed without a canvas and paint, paper and ink, or any “real” material you can touch, feel, or smell. In the same way I am witness that some fictional art is real whether it exists only in the mind or it is made of paper or canvas that is created by a real person for fictional purposes. So now I not only write fiction. I paint it as well. And I’m not even an artist!

The writer’s journey gives the author a much deeper experience in the world of her book than the reader will ever get. A writer sometimes sees, touches, smells, hears, and tastes a world before it ever gets passed on to the reader. Some of that book world is real, but an author gets to create some of it herself. It’s one of the joys of writing.

See more about art mentioned in I Scream on this Pinterest board.

Now for the free drawing!

I have randomly picked a winner from my subscribers list to receive the ebook version of A Fool and His Monet by Sandra Orchard. I’ve read the book and found it to be a fun read. Don’t you love her title? Others in this series are: Another Day, Another Dali, and Over Maya Dead Body.

And the winner is (drum roll, please) …  Mary van Everbroek!

I plan to give out three more books this year to subscribers of my Book Blast:

September: A Cry from the Dust by Carrie Stuart Parks

December: Not in the Heart by Chris Fabry