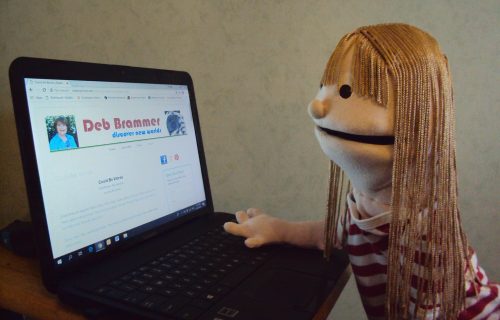 How many characters do I need?

Monologs are boring. A puppet show needs give and take, which means you need parts for at least two puppets. The exception is when a real person outside of the puppet stage speaks directly to the puppet, thus making an extra part. Puppets  shows with two or three puppets are the easiest to write and perform.  Two or three puppeteers can also squeeze comfortably inside and/or in back of the stage.

Many scripts for two puppets can be easily adapted for three puppets by taking some lines from the two characters and giving them to a third. The reverse is also true. Before you write the script, decide how many parts you want to include and write the script accordingly. One puppeteer can easily perform more than one part by having individual puppets enter for only part of the performance or exit before the ending.

Who are my characters?

Sesame Street’s Bert and Ernie make a great pair because Bert is a careful pessimist and Ernie is a free-wheeling optimist. Bert’s pessimism isn’t depressing because Ernie’s optimism balances it out. Bert grounds their dialogs in reality and logic, but Ernie’s witty comments make it fun.

On the various Muppet shows, Kermit and Miss Piggy work well too. Miss Piggy gives voice to all our inner urges to be selfish, vain and overly dramatic. If all the Muppets were like Miss Piggy, their world would be like our world at its worst. But Kermit is an optimistic encourager who helps others see their need to be friends. However tense the dialog gets, the Muppets always return to a place of appreciating others for who they are. This sweetness softens the whole show.  Without it, the show would be harsh and unsatisfying.

In a short puppet script you won’t have time to fully develop character, but try to give your puppets different personalities. If all of the lines could have been said by either character, you probably haven’t developed the personalities well enough. If you are giving regular puppet shows you could develop personalities that can be continued from one script to the next. That way the viewer can get to know your puppets over a period of time.

What kind of tone should my script have?

Puppet shows are almost always meant to be funny. If the subject has no humor, it’s probably not a good fit for puppets. The script should also make one simple point or the message is missing. A show that is all preaching and no fun comes across as a sermon. Balancing humor with a simple message makes a good puppet show.

What’s funny? There is a fine line between funny and stupid. People have a lot of different ideas about what they think is funny but simple, gentle humor usually works best. Plays on words or riddle-type humor works well.

Puppets generally have the simple, immature personality of a child. Your audience will expect your characters to argue a bit, act like a child, voice inner feelings that mature adults keep to themselves. But constant bickering loses its humor. Puppet characters may make mistakes and say unwise things, but they should turn around a little to recognize their mistakes by the end of the script. This allows them to grow in their struggles in a way the audience can identify with. A radical change from a small event will be unbelievable to the audience, but small changes a character makes during a show makes for a satisfying ending that challenges the audience.

I believe you need to be careful when talking about serious or sensitive topics. Salvation is never funny.  Suicide is never a joke. The Bible talks about laziness, however, and you can poke fun at laziness without being inappropriate. I believe scripts that distort a Bible story too far can also be sacrilegious. Make sure your script is in good taste.

How long should my puppet script be?

From a practical standpoint, scripts that keep arms in the air too long make for weary puppeteers. The audience can sense this weariness in the unnatural positioning of the puppets. Puppet scripts don’t need to preach a sermon with three points and a poem. Their main purpose is to draw attention to a situation and begin to make one simple point. After the show is over, a teacher or speaker can continue to talk about the subject.

I find that a script of about 750 to 1000 words is a good length. If it’s much longer than that, the attention of the audience lags. Once I’ve finished writing a script, if it seems too long, I try to cut a section or a few lines here or there to tighten it up. If there are more than two or three characters in a script, however, it may need to be a bit longer to give every puppeteer a chance to have some good lines.

How much movement should there be in my script?

Ideally, puppet shows are not just “talking heads.” Puppets need to move about in a natural way. Arm rods and props can allow puppets to move in ways that add meaningful action. Avoid constant motion for no reason, however, which distracts from the message.

It’s different, however, when puppeteers are just beginning to learn to manipulate puppets. Then they may need simple scripts with little-to-no action to allow them to concentrate on hand positioning and lip synch.

Before you begin to write your own scripts, you will find it helpful to study other scripts. Look for these things in each script:

You can start here with free puppet scripts by me.