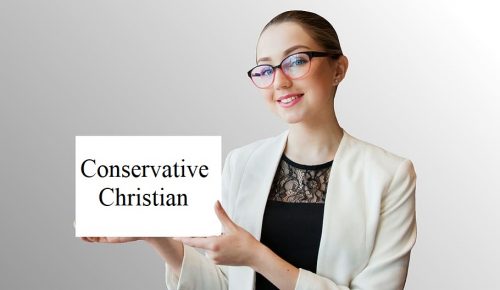 I am a conservative Christian. You may think you know me, but you might be surprised.

Being a conservative Christian doesn’t make me think that I am better than you.

I’m not a Christian because I am so good. I’m a Christian because I know I can never meet God’s standard on my own. I think and feel and do wrong things. But God has granted me salvation on the basis of Jesus’ death on the cross. Jesus was completely holy and didn’t deserve to die, yet he took my punishment. I’m sinful and don’t deserve God’s mercy, yet I have believed in Jesus as my Savior, so he has given me his righteousness.

Beyond that, being a conservative Christian doesn’t make me better than a more liberal one.  You may be less conservative than me, and yet please God in areas in which I fall short. I may please God in areas you in which you struggle. I don’t look down on you because you are different, but I may disagree with you on some things. We each have to answer to God for what we do. I’m simply trying to do the right thing.

Being conservative doesn’t make me a legalist.

The book of Galatians talks about true legalists. A legalist tries to keep a list of rules in order to gain merit with God. Sometimes legalists try to earn or keep their salvation by keeping this list of rules. Other legalists obey rules to exalt themselves rather than glorify God. Their emphasis is on keeping a list of rules in their own strength, rather than living to please God by the strength of the Holy Spirit.

The late Dr. Myron Houghton said once said:
A distinction should be made between lists and legalism. It is certainly true that believers differ on their lists, and we must evaluate each item on a list in light of relevant Scriptural teaching. But disagreeing with fellow believers over whether or not Scripture supports their lists has nothing to do with legalism! Legalism is related to why one should obey a list rather than to the rightness or wrongness of the list. If people think they gain merit with God by keeping a list [any list!!], they are legalistic!

True freedom is living obediently to Scriptural guidelines in the knowledge that all of our sins have been forgiven because Jesus Christ died and now lives for us. (Romans 5:10) . . . And true liberty does not use itself as an excuse for sinful living (see Galatians 5:13), but rather, recognizes that the grace of God teaches us to deny ungodliness and worldly lusts and to live soberly, righteously and godly in this present world (Titus 2:11–15).

We need to be careful who we call “legalists.” Just because someone is more conservative than I am doesn’t make him a legalist. He may have good reasons for his standards. I have no right to call him a legalist just because his rules are stricter than I think they need to be. I can’t see his heart. I don’t know his motives, unless he reveals them to me.

Being conservative doesn’t mean I’m too stubborn to change.

I know Christians who have less strict standards than I have, and some who are more strict. If you are a Christian, I’m glad you are. I don’t hate you because you have come to different conclusions than I have. I may not be able to work with you in certain ways if we can’t agree on some issues that are important to me, but that doesn’t mean I don’t care about you.

The world changes quickly and so does the church. Sometimes I see people change in ways that I don’t feel would be right for me. I’m trying to please God and live the way he wants me to. You may see an issue as a matter of preference, where I may see it as a conviction. Thus you feel free to do something that I do not. That doesn’t make me mean. I’m simply trying to please the Lord in the best way I know how.

Remember, if I feel something is not pleasing to God, yet do it anyway, that is sin. (Romans 14:23) So please don’t push me to do something against my convictions. I’m not just trying to be stubborn.

Yes, I know the world, and much of the church, is changing faster than I am. I expect to be different from the world. The Bible tells us to expect that. (1 John 2:15) But sometimes I even struggle to find a place in the church. Much of genuine Christianity would find me hopelessly conservative and I actually grow weary of wearing a legalist label simply because I’m trying to do the right thing. Very small differences sometimes divide the more conservative segment and I feel ostracized from Christians who I would like to consider as friends. Living today as a conservative Christian is not easy. Sometimes I struggle to know how God wants me to do certain things, but I am trying to figure out God’s pattern for me and then live that way.

So you may not agree with me. I may seem hopelessly conservative to you. But please don’t assume that I’m a fighting legalist who thinks I have all the answers, refuses to change, and wants to force you to be like me. I’m actually just an ordinary Christian who is trying to please God in a sinful world.