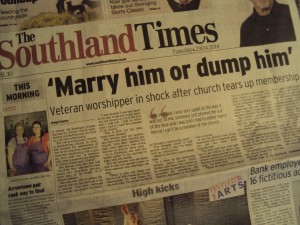 I woke up this morning to these headlines from our local newspaper, The Southland Times. According to the paper a local woman had been a member of a denomination for 30 years. She has also lived for eight years with a man to whom she is not married. The church told her she would have to marry him or lose her membership in the church. She wouldn’t mind marrying him, but he wasn’t ready and didn’t want to be forced into marriage. The church welcomed her to continue to attend, but said she couldn’t be a member if she was living in a de facto relationship.

“This is 2014, not the 1950s, times have changed,” said the woman. “There is only one judge and that is God . . . I’ve thought about it and prayed about it and I’m happy with my relationship.” Her partner was quoted as saying the church’s view was “archaic. . . . I understand this is the year 2014. Modern Christianity is supposed to be about acceptance and understanding.” As is so common today, this couple has decided what God should be like and what churches should teach all apart from what the Bible teaches. God has already spoken clearly on this subject in the Bible, but society has formed their own ideas of what God should be like and judges Christianity on that basis.

Maybe you’ve read something recently that affects you so strongly you know you must respond. Your response may depend on your personality. Some people march to the computer immediately and let their anger explode into words. Others may be so afraid to write the wrong thing that they end up writing nothing at all. Writing an editorial can be a good way to stand up for your faith. With the wrong kind of editorial, however, you merely give your faith a black eye. Where do you begin?

If you follow the editorials much you’ll notice that some people write about so many issues that they come across as hungry for attention. Others bring up issues that have nothing to do with the publication. Remember your target audience—largely non-Christian people from every part of society. Your letter may be one of the few things they ever read from Christians. Do you want their introduction to Christianity to begin with nagging criticism about petty issues? Remember you are no longer sitting around the kitchen table chatting with friends. Your editorial stands front and center in the public spotlight. Is the issue appropriate for the media you plan to send it to? Will it interest the reader or are you simply venting your own aggravations? Does it deal with an issue that has already been raised in that media? Can you speak about the issue in a way that will represent Christianity well?

If the issue raises strong emotions in you, take time to calm down before you write your letter. Your goal is to convince readers of your point. If you call people stupid idiots, exaggerate the issue, or use highly emotive language, you give ammunition to the enemy. If you use bully words, you can’t expect to earn respect. If you make claims you can’t back up, you lose all credibility. Make sure your words promote your point, not give your readers more reasons to oppose it.

3. Stick to sound principles and logic.

What main point do you want to make? How can you support that point with fairness and reasonable logic? If your words sound more like a raving hothead than Christ, begin again. Write and rewrite until you make your point as concisely and fairly as possible. If your letter becomes too long or rambling you give the editor an excuse to cut parts out, and he or she might take out the parts you feel are most important.

4. Ask a friend to read your letter before you send it.

Your meaning may be perfectly clear to you, but an objective eye can point out parts that might be confusing or poorly written. When you put your letter into the public forum, you want to make sure its shirt is tucked in and the dirt is spit-cleaned off its face.
As Christians, we need to stand up for what we believe in. Let’s do it in a way that honors Christ.

My husband and I felt we needed to speak out on this issue. When a disgruntled church member takes a private church issue to a public newspaper and they splatter it on the first page, something is wrong. What if your most difficult church issue left your business meeting and made the headlines of the local paper? We’re not talking about crime here. No sexual molestation or hate speeches by protesters. The Bible clearly teaches a couple should be married before they live together in a sexual relationship. Many churches teach this and they have the right to expect it of their members. When they do they should not be subjected to mockery and bold headlines. The God of the Bible has made his standards on the matter clear and we’re allowed to judge the actions of people who clearly break this standard, especially fellow church members who flaunt clear teaching. We can love individual members and still hold them accountable to the stand we take as a church.

My husband and I have spent a good deal of today talking about and drafting our letter to the editor. We want to stand up for our beliefs and represent Christianity well. Now we’ve sent it to the editor with a prayer that it will be received well in the community. In case you’re wondering what we said, here it is:

We were extremely disappointed in your front page article about the church member who lost her membership because she chose to live with a partner to whom she was not married. This article is totally inappropriate for any newspaper article and effectively bullies churches for simply enforcing their standards. Calvin Community Church is taking this unpopular stand because of the Bible’s clear teaching that a sexual relationship outside of marriage is wrong. (Hebrews 13:4) They gave the woman a choice and she chose to attend a different church rather than resolve the marriage issue.

Churches have every right to have standards for their members and to enforce them. This church has done so and, as a result, has been labelled “archaic.” “Modern Christianity is supposed to be about acceptance and understanding,” the article says. You seem to want to bring this out in the open so that society can dictate what the church should do. Many churches, however, choose to base their standards on what God says in the Bible rather than by popular opinion. That’s how it should be.